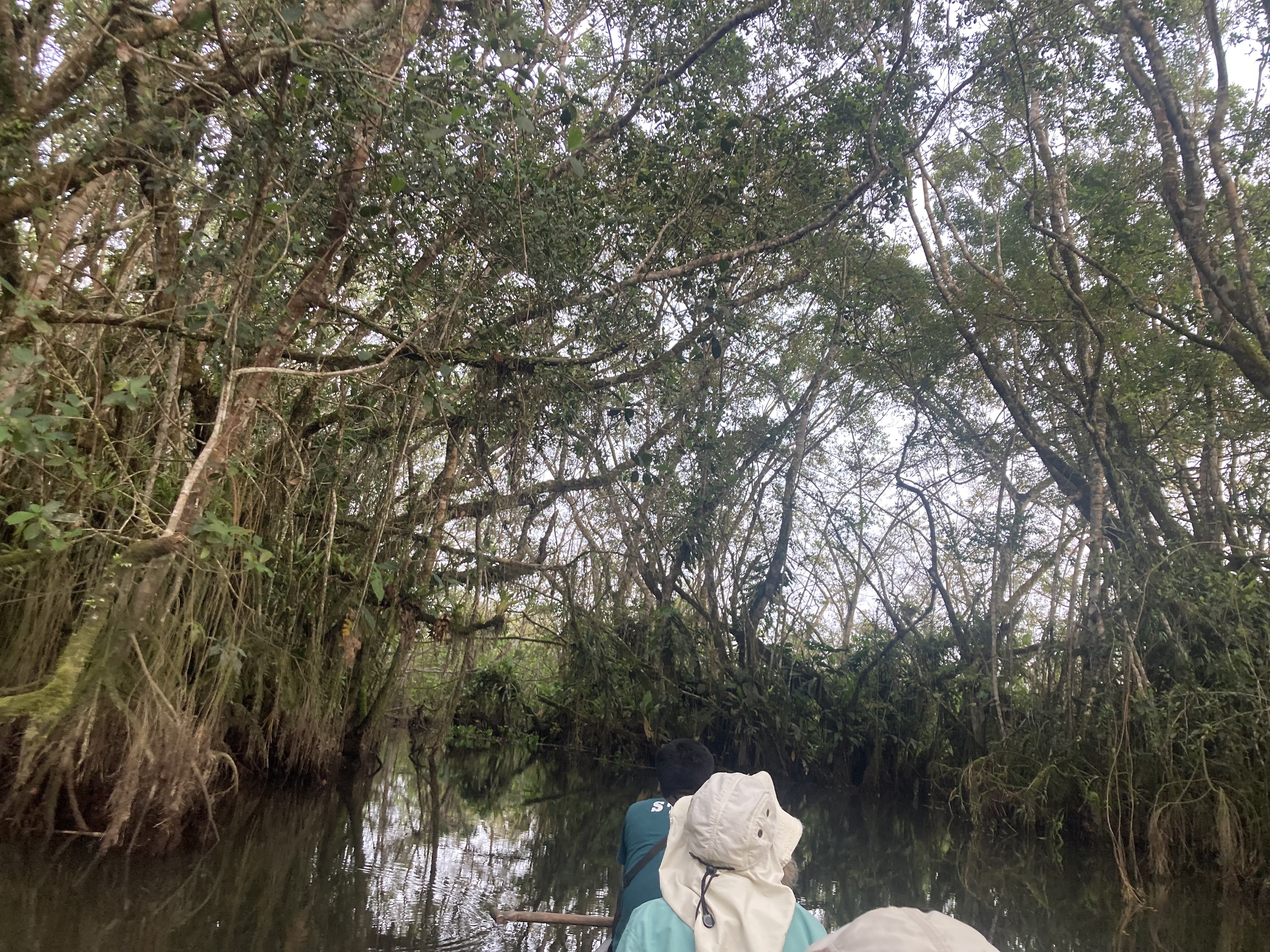 Birding in the Amazon lowland rainforest is an experience set within an experience. Simply being there, way out there, far from cars, even roads, away from the world of industry and the oppressions of modernity is an amazing thing in itself; being in such a forest at the mercy of unadulterated Nature is perhaps only comparable to being out in the vastness of the open ocean or the endless horizons of one of the great deserts. There is no place more alive, a close look at anything revealing even more smaller items of life. And, in this, an unbelievable diversity of birds lurk, many so good at lurking that they are rarely encountered even by those looking for them. And, in this, we set our tour, based at a comfortable lodge staffed and managed by the indigenous people, and we birded the land, the water, the islands, the edges from top to bottom seeing such charismatic and signature birds as bizarre Hoatzins, sublime Agami Heron, six species of puffbird, five species of trogon, the local Cocha Antshrike, some manakins, and woodcreepers, and many more. Everyday was an adventure, some planned and some unplanned, but all part of the experience.

Even though our first day is mostly transportation, it reflects the remoteness of the locale. After a plane ride there’s a three-hour motorboat ride down the Rio Napo, the masterful river captain steering around sandbars and submerged logs and whatever to get us out there. It looked like it was going to be a race against the weather with black clouds and rain looming in the direction we were going. Fortunately, we didn’t get much rain, just a sprinkle, and we went from the motor canoe to a paddle canoe for the final leg to the lodge. It was still transportation, but now we were moving slowly and quietly through the flooded varzéa forest. Little did we know that without even working (a large part of finding birds in the forest) a pair of Cocha Antshrikes popped up and were foraging in a tangle on the edge of the lagoon. The male, plain and black, but the female is almost a glowing orange with a black head. Beautiful and special given its tiny range and skulky habits. When we broke out into the open by the lodge, the sky was brighter and we ended up spending the remainder of the afternoon on the deck of the lodge overlooking the lagoon. A Laughing Falcon perched up on a small tree. Scarlet-crowned Barbets poked around. A Hoatzin was brooding a small, but what looked to be a nearly fledged young, and a Ringed Kingfisher chattered nearby. This was our base for the next week. 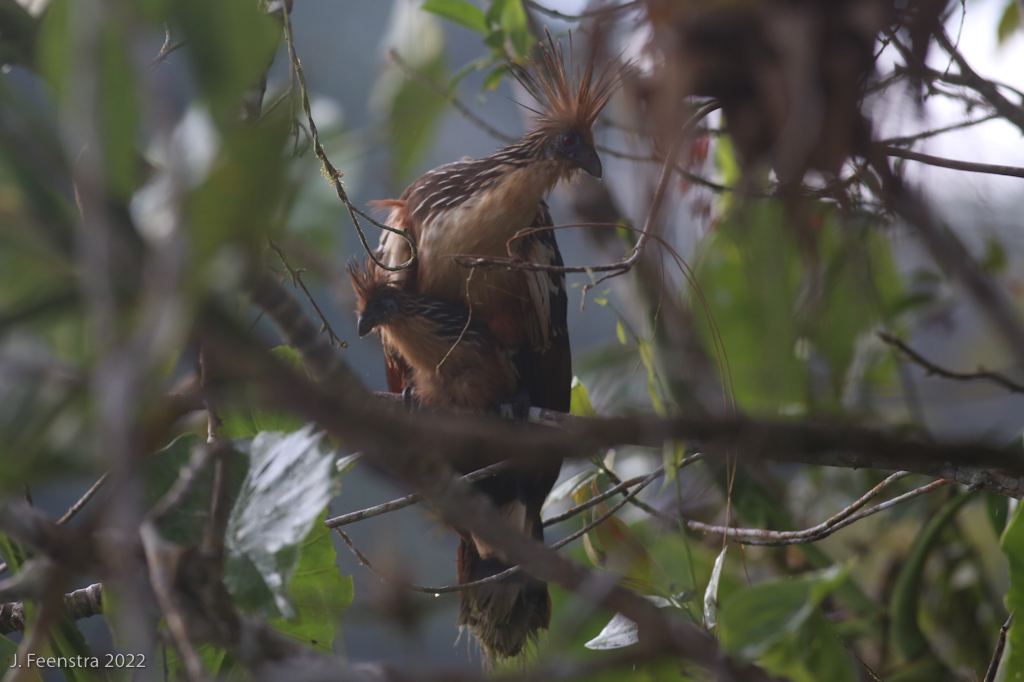 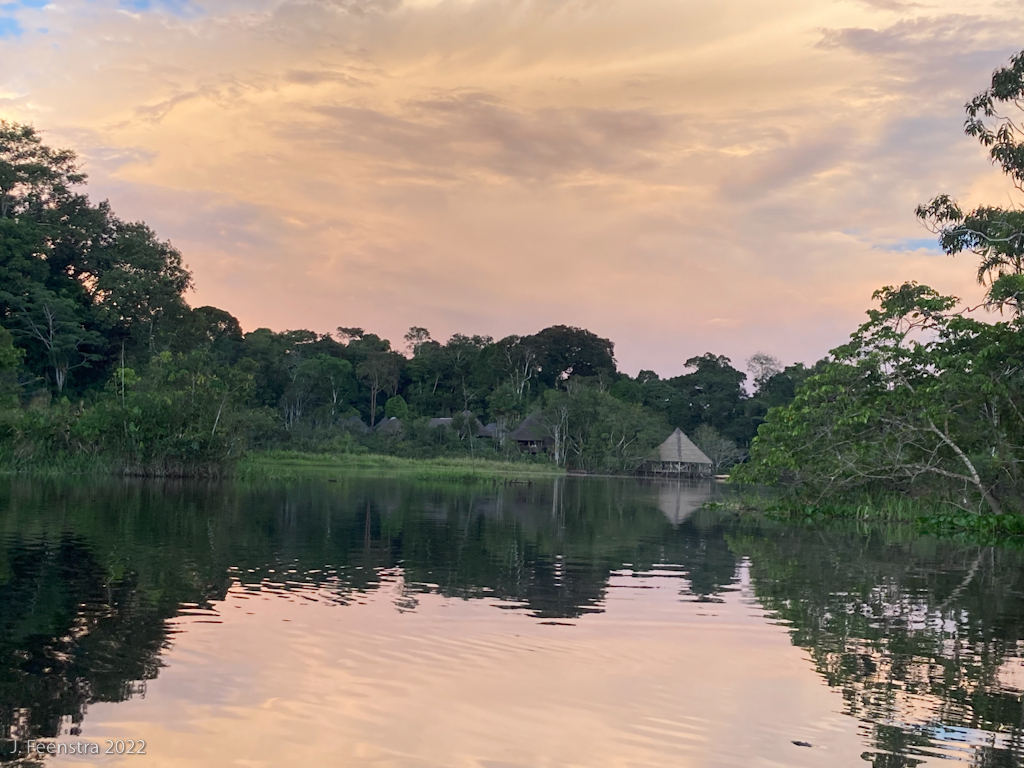 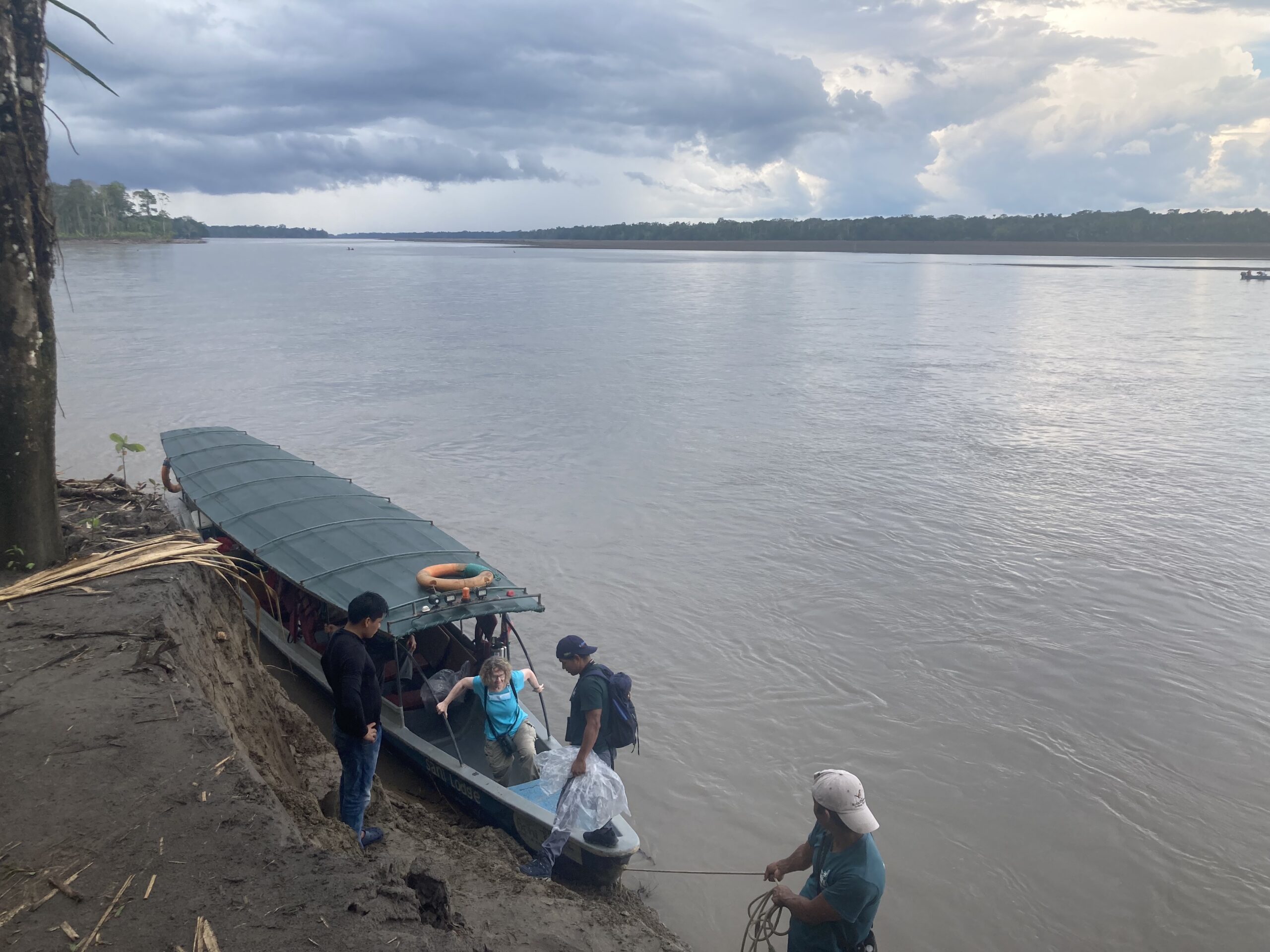 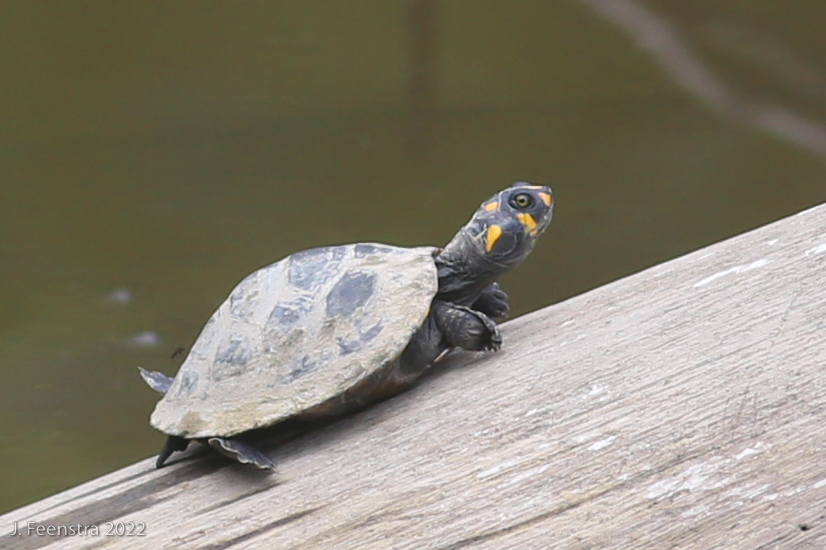 A highlight to any visit to the rainforest is a morning in the canopy tower. It’s amazing to think that there are birds just at the treetops that one won’t see from the ground (without much scoping and neck stretching). From the tower, there is still scoping, but no neck stretching, and much of the time, the birds come to us moving as they do through the canopy. A far-ish Crested Eagle (close for a Crested Eagle) was complemented by many, much closer birds including a little flurry of four species of euphonia. There were also several species of toucan including big White-throated Toucans down to a small Golden-collared Toucanet. There were also Blue-and-yellow Macaws, Cinnamon Attila, Pink-throated Becard, and on and on. After lunch and the heat of the day, we started into the forest, but were turned back by rain. Fortunately, that was after we had nice looks at a Blue-crowned Manakin.

The forest adventure continued the next morning on the trail through the primary forest. Birding the dark rainforest is hard work and the diversity of the place is disguised by the efforts wildlife make to avoid being seen. Whatever, we’re here to bird, and bird we did. We came out of the jungle that morning after seeing a few antbirds, a few trogons, but, most memorably, three species of puffbirds including both Brown Nunlet and Lanceolated Monklet. At the trailhead where we parked our canoe, a juvenile Snail Kite sat atop its snag eyeing us making sure that we weren’t gastropods. The afternoon was pretty relaxing. We were going to take a siesta anyway, but the rain made it last a little longer, long enough to watch birds from the shelter of the bar and do a little wandering around the grounds. An orange-bellied (hyper-chromatic?) Tropical Kingbird was pretty weird. We saw both a juvenile and an adult Hook-billed Kite hanging around and a couple of Amazonian Umbrellabirds. Then we were back in the canoe. The end goal was a dusk try for Tawny-bellied Screech-Owl (got it), but in the preceding daylight we came across some other charismatic stuff like a couple of Red-capped Cardinals and a Rufescent Tiger-Heron. We came back to the lodge just in time for dinner. 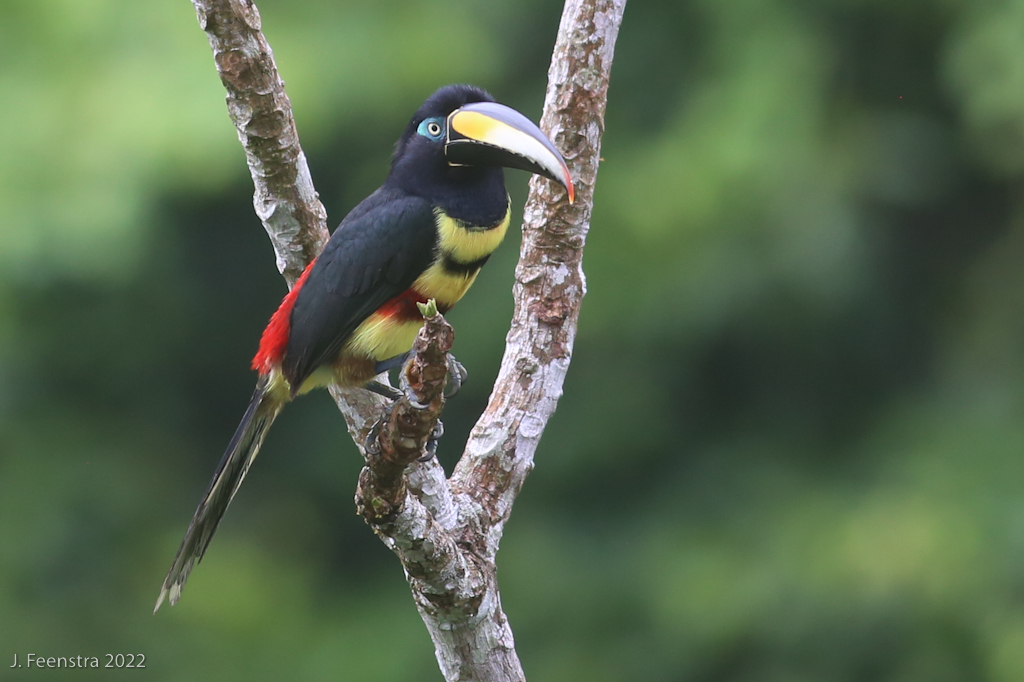 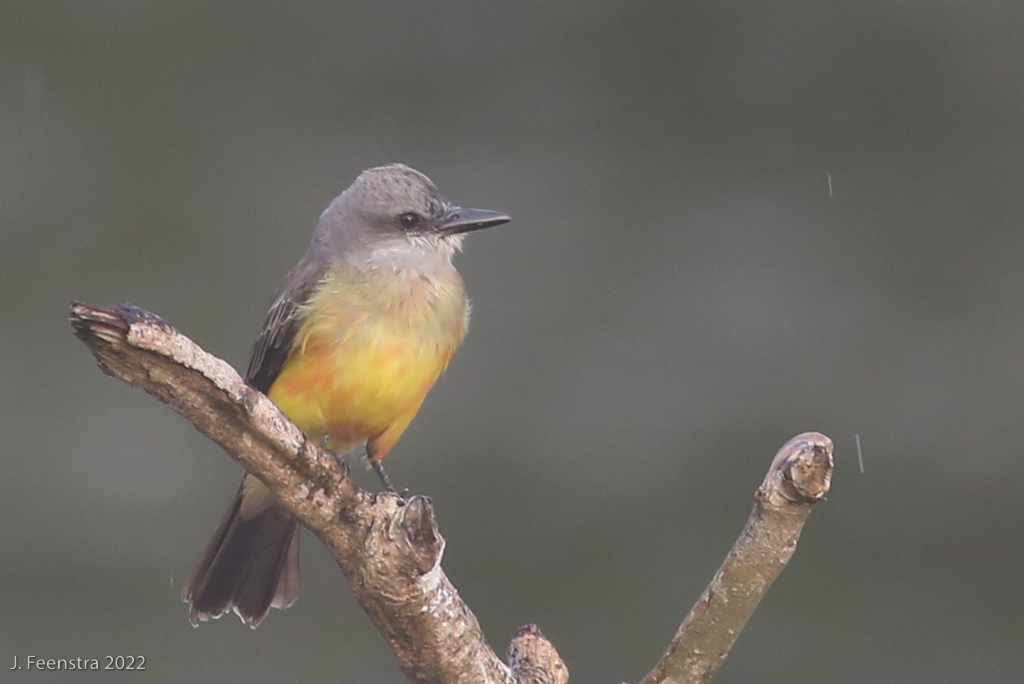 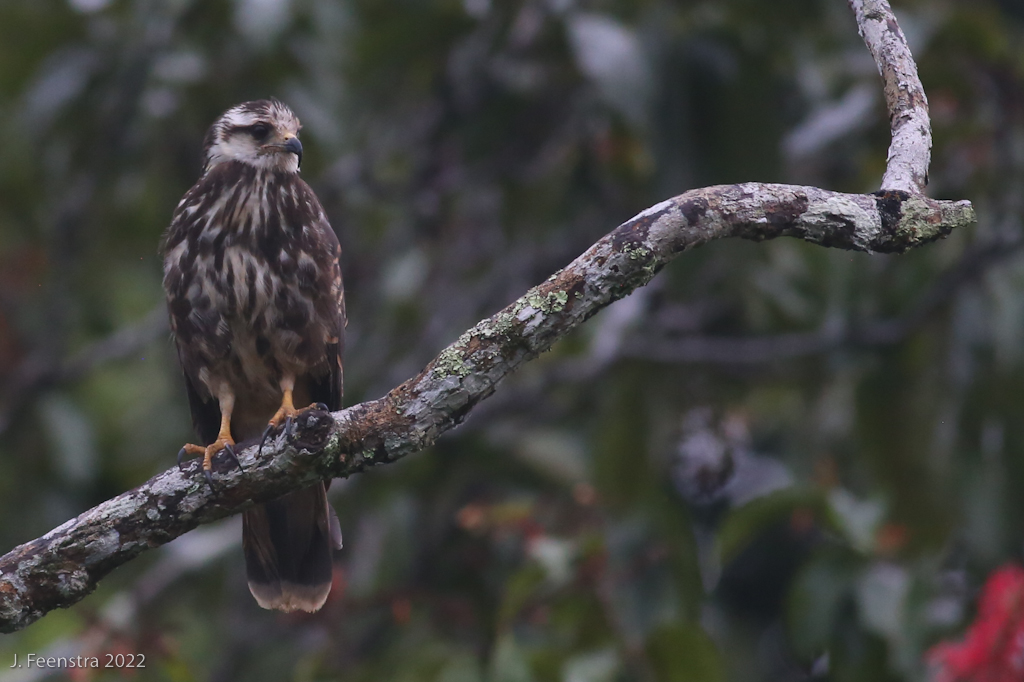 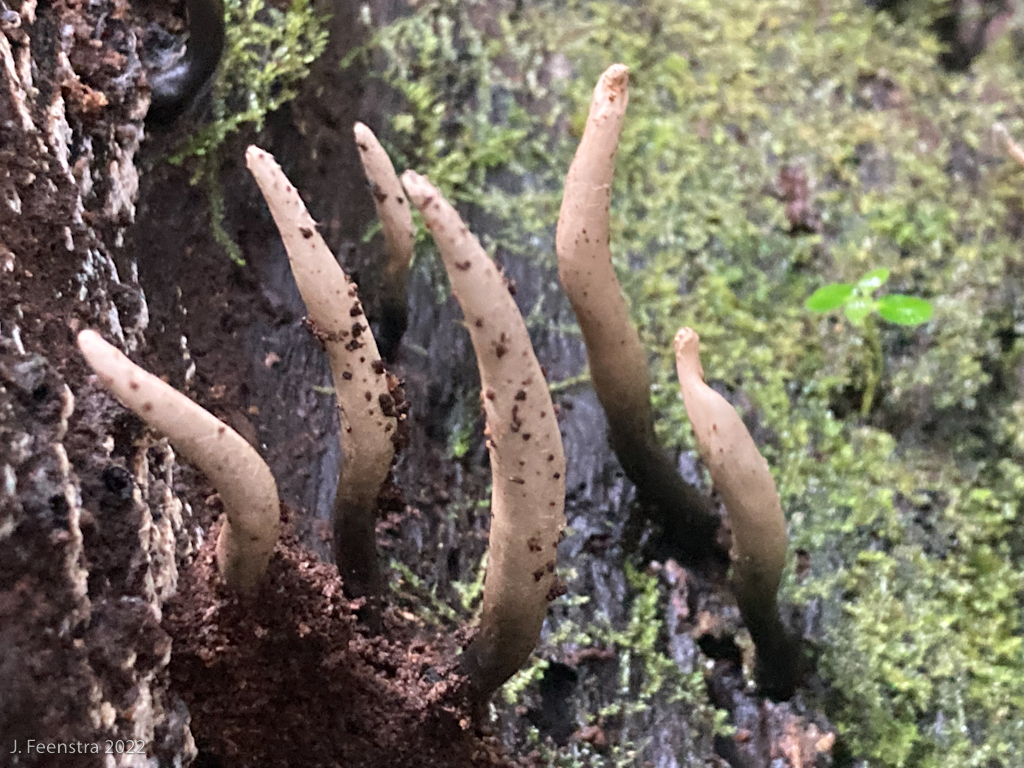 Only here in the Amazon could river island birding be a thing. Though, with every ecological niche full to bursting, it shouldn’t be a surprise that there are certain birds that only live on the ephemeral islands in the Rio Napo. We spent a couple of hours tracking down a hummingbird, a couple of spinetails, an antshrike, and a few others. The Oriole Blackbirds were particularly striking, but the subtle beauty of the humble Chestnut-bellied Seedeater was also admired. Likewise, being out on the river got us up close with White-banded Swallows, Brown Jacamar, an early arrival Lesser Yellowlegs, and the well-named, yet forever unappreciated, Drab Water-Tyrant. When ashore we birded the secondary river edge forest. We got really close to a White-lored Antpitta, but it never showed itself, however, the Buff-throated Woodcreeper was nice, and the flyover King Vulture was royally cool. We even somehow came across a Chestnut-capped Puffbird in a cacao orchard. It was a long day, but another good one.

Since the rainforest is a dynamic place, a second day in the tower was in order. This time it was pretty sunny and hot, and activity was low. We did have a couple of new experiences, though. The Golden-bellied Euphonias were still around, but this time instead of just blasting by, they were meticulously scouring a mossy branch for food giving us good and extended looks. Similarly, an Olive Oropendola also landed obligingly close instead of just flying by. And, we had a nearby, and spectacular, Spangled Cotinga. On the forest floor we found a couple of Golden-headed Manakins, then we got caught in a soaking rainstorm on the way back to the lodge. Late in the afternoon, after changing clothes, we went back out in the canoe again, this time into the far reaches of the flooded forest channel. More Ringed Kingfishers, Black-capped Donacobiuses, a stately Limpkin, and, of course, weird, grunting Hoatzins lined our journey. Within the flooded wood a spectacular Agami Heron was a singular highlight. Even without the birds, the paddle out of the forest and across the lagoon after dark was otherworldly with bioluminescent invertebrates being stirred in the water, the eye shine of many caiman, and the cacophony of countless frogs drowning out everything else. 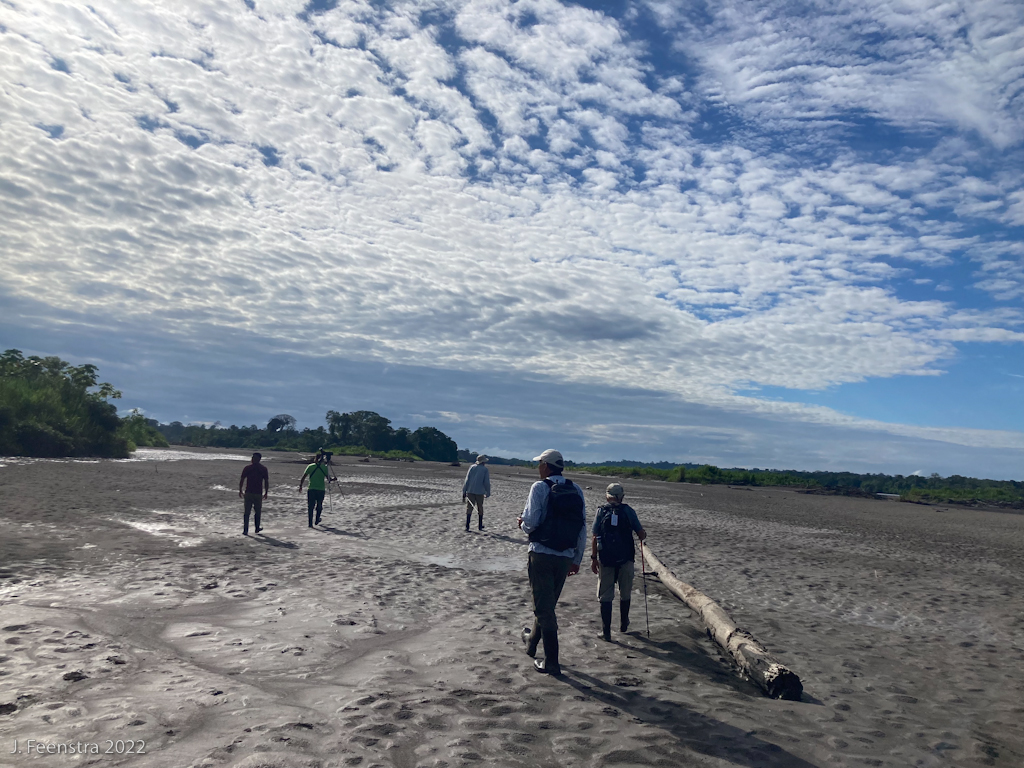 The gang on the river island 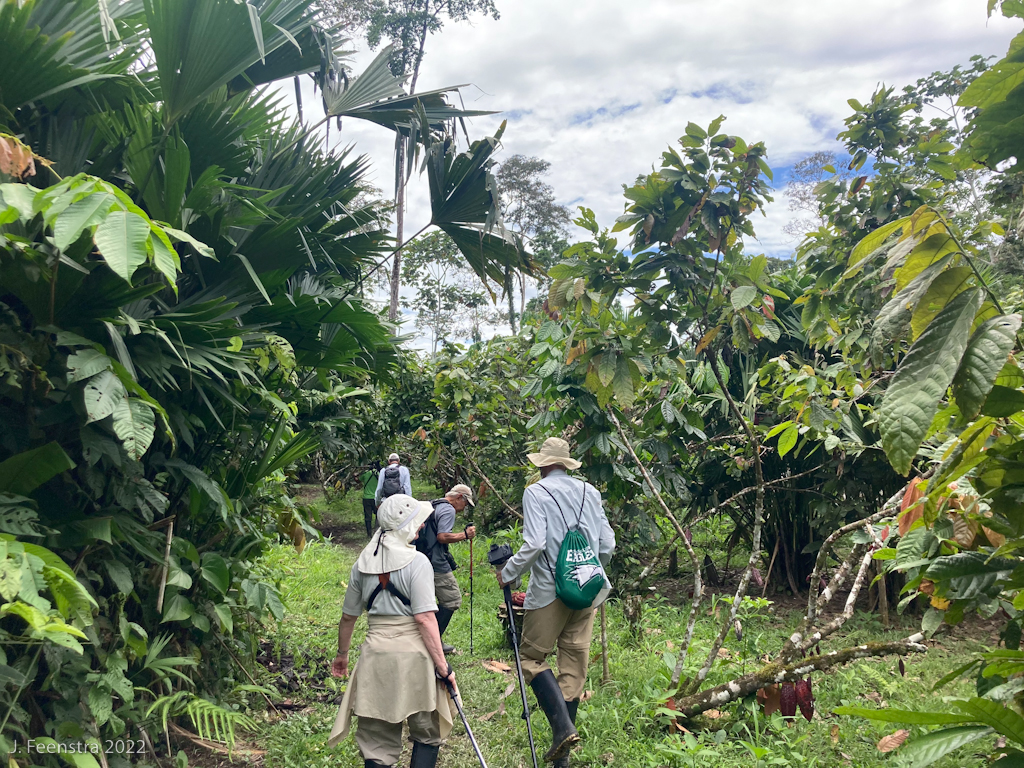 The gang in the cacao orchard

One of the things about spending a whole week in the Amazon, is that sometimes a day just gets thrown. The parrots weren’t coming to the clay lick. We could hear them and see them flying around, but it was a disappointing show. Some consolations were nice looks at Spotted Tody-Flycatcher and Little Woodpecker on a nearby river island. We started a forest trail that started with an encouraging Great Jacamar and the sublime fluting of a Musician Wren, but we had to stop when we got to a collapsed bridge. Then it started pouring rain and we had to hike out pretty much soaked. It didn’t let up for hours and by then it was afternoon and we were back at the lodge. It isn’t the Amazon rainforest because it’s dry. So it goes, sometimes, and tomorrow is another day.

Our last full day in the jungle was a contrast. We took our time this morning to work the edges of the forest first from the canoe and then on foot through the farms on the bank of the Rio Napo. After going by many unseen, we finally had good extended looks at a singing Plumbeous Antbird in a riverside thicket. In the farm edge we had an accommodating Ferruginous Pygmy-Owl, some Scarlet-crowned Barbets, White-winged Becard, and Violaceous Jay – all common birds, no doubt, but still Amazonian specialties and super cool. An Orange-crowned Manakin, a less spectacular, but a much more rare specialty was also nice. In the late afternoon we took our final canoe paddle around the lagoon to get our last looks at Hoatzins, Black-capped Donacobiuses, and Cocoi Herons, and into the flooded forest for some woodcreepers and generally spooky scenery. We ended our paddle in the dark with a Crested Owl calling above us. 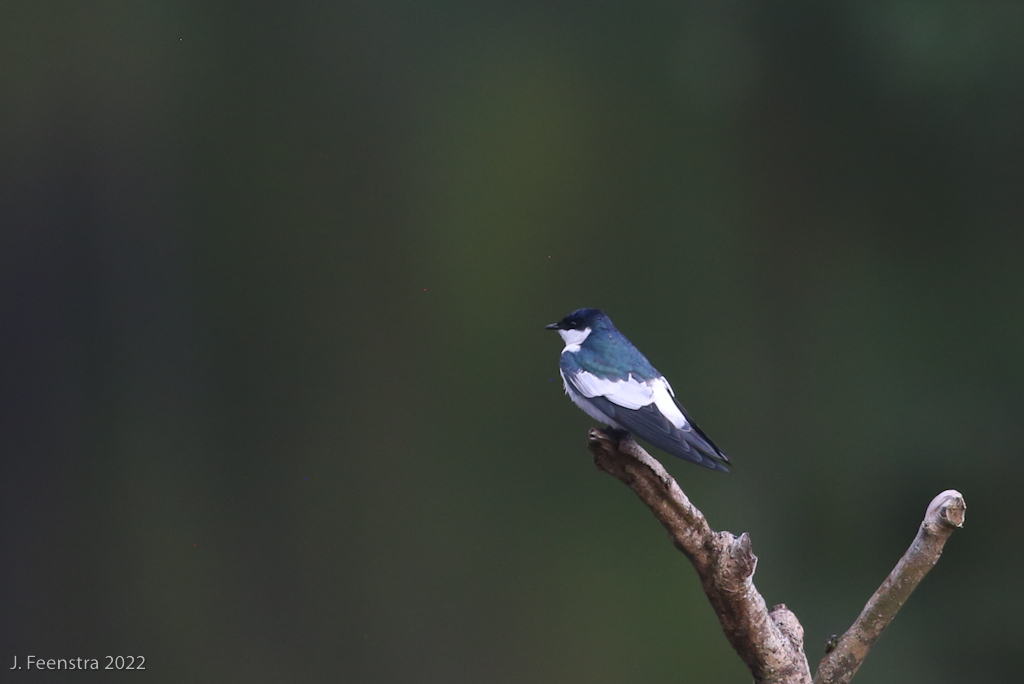 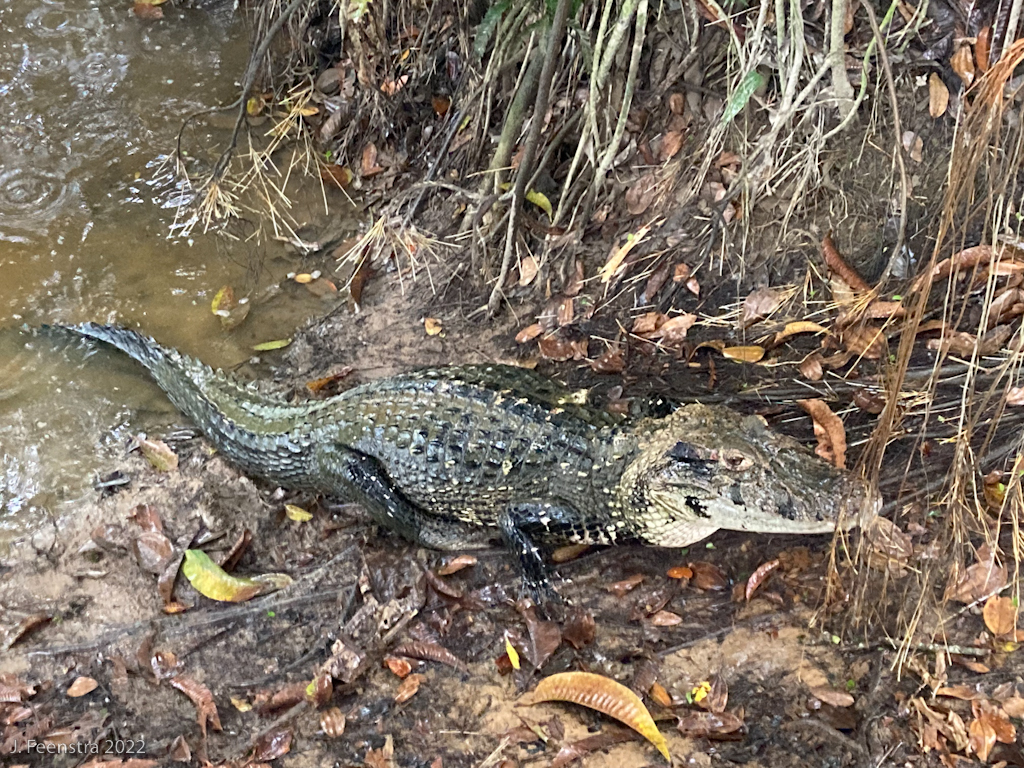 The final day of the tour was supposed to be predictable transportation, but turned into a bit more of an adventure than we had planned. We made our way out of the lodge and to the Rio Napo in the pre-dawn. We made the motor boat ride up river to Coca faster than normal due to the high water. However, when we got there we found that our flight had been canceled. So instead of a 40 minute flight back to Puembo, we hired a van and had a six hour scenic drive from the lowland rainforest, up through cloud forest, past spectacular waterfalls and mountain vistas, the paramo above tree line, then back down into the inter-Andean valley to our target destination. These things happen sometimes, and when they do, we make the best of it. That best of it included a little birding in foothill habitat with some new bird species like Red-headed Barbet and Many-Spotted Hummingbird. We also had up close access to a friendly Mealy Parrot. We could study its frosty plumage as it nibbled our clothes; fascinating after seeing so many in the treetops and flying around for the past week in the lowlands. And, that was it. We were back in Puembo in time for dinner after an adventurous week in one of Earth’s most amazing places.

The eBird trip report for this tour is HERE. Also, I took photos of a bunch of plants and non-bird animals along the way and put them in iNaturalist. Those photos with some identifications are HERE. 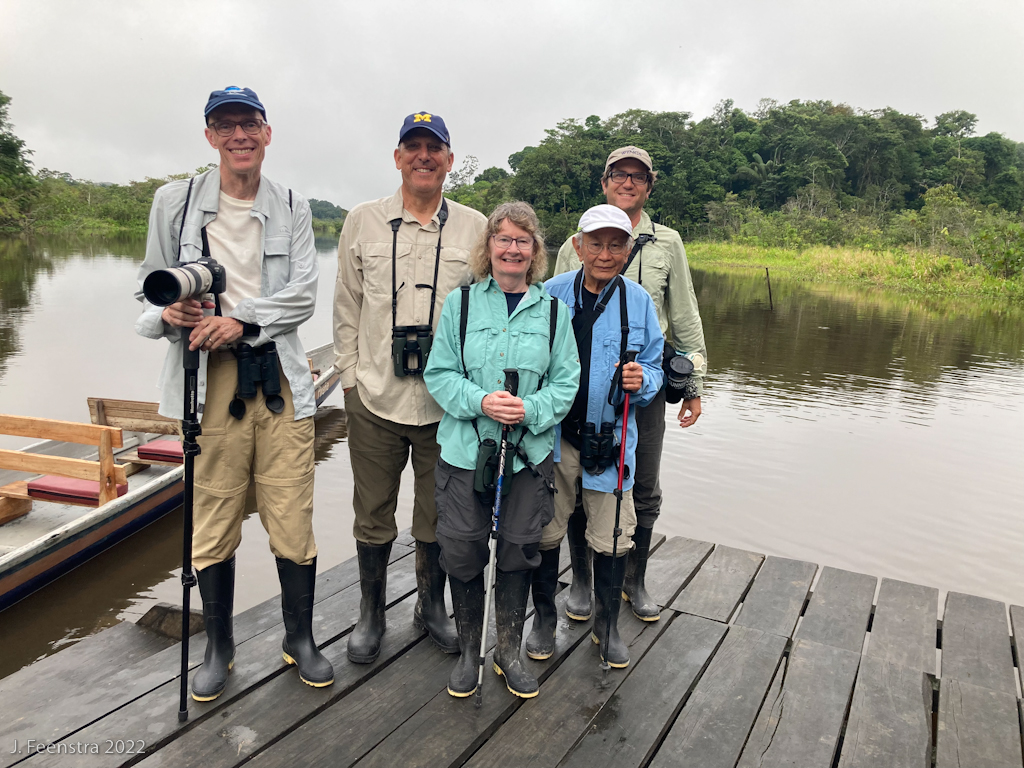 The gang on the dock 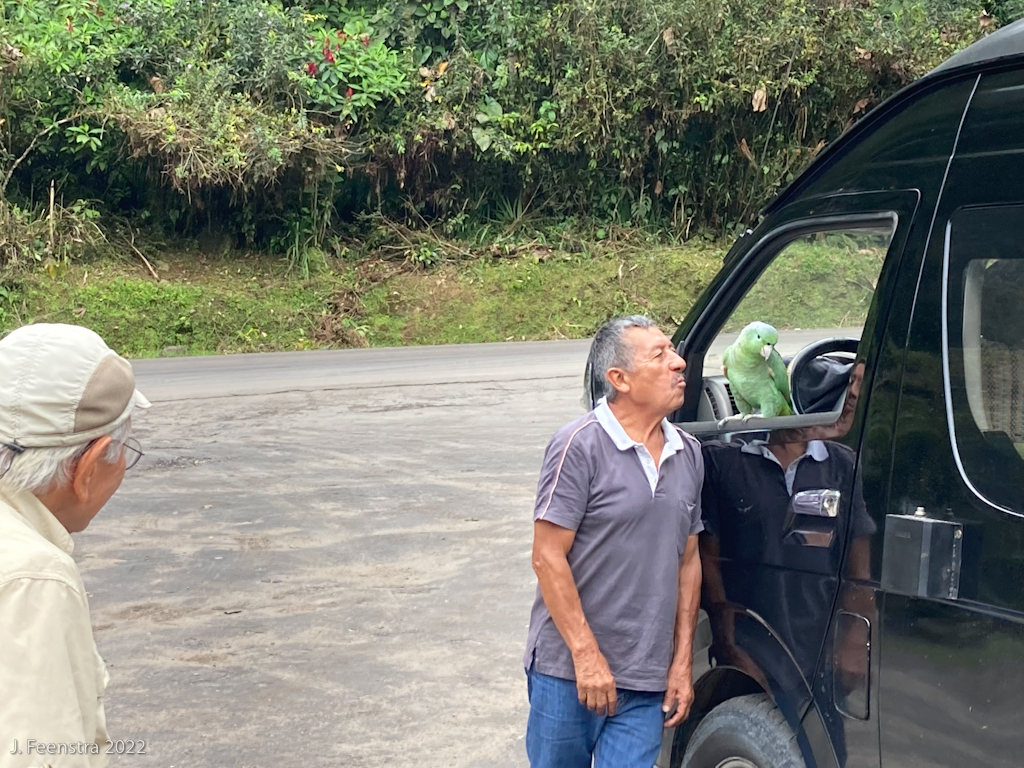 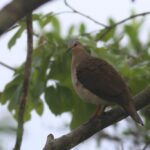 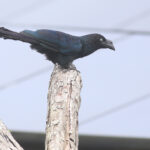 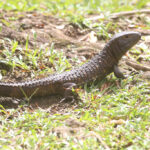 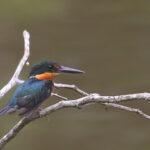 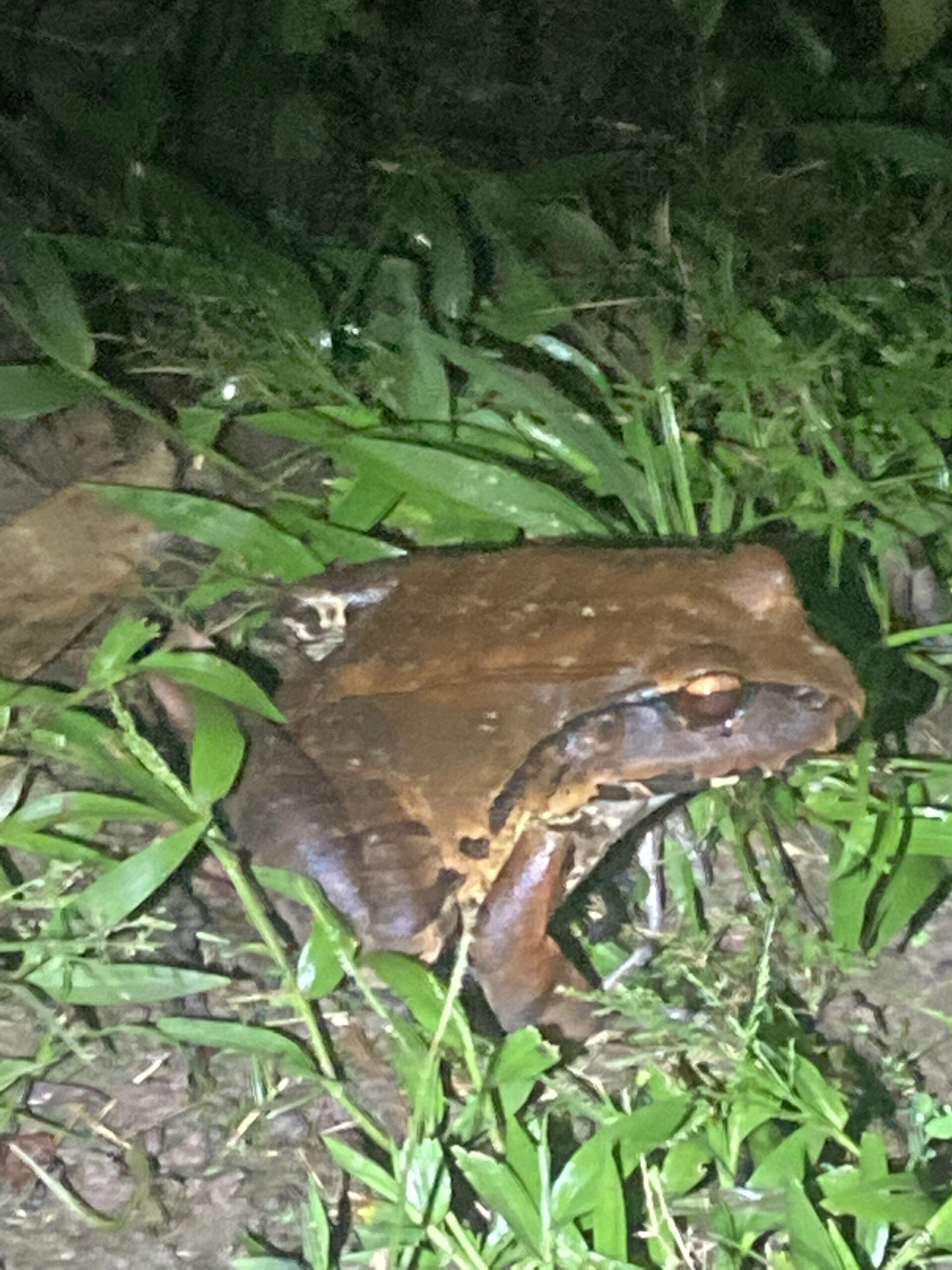 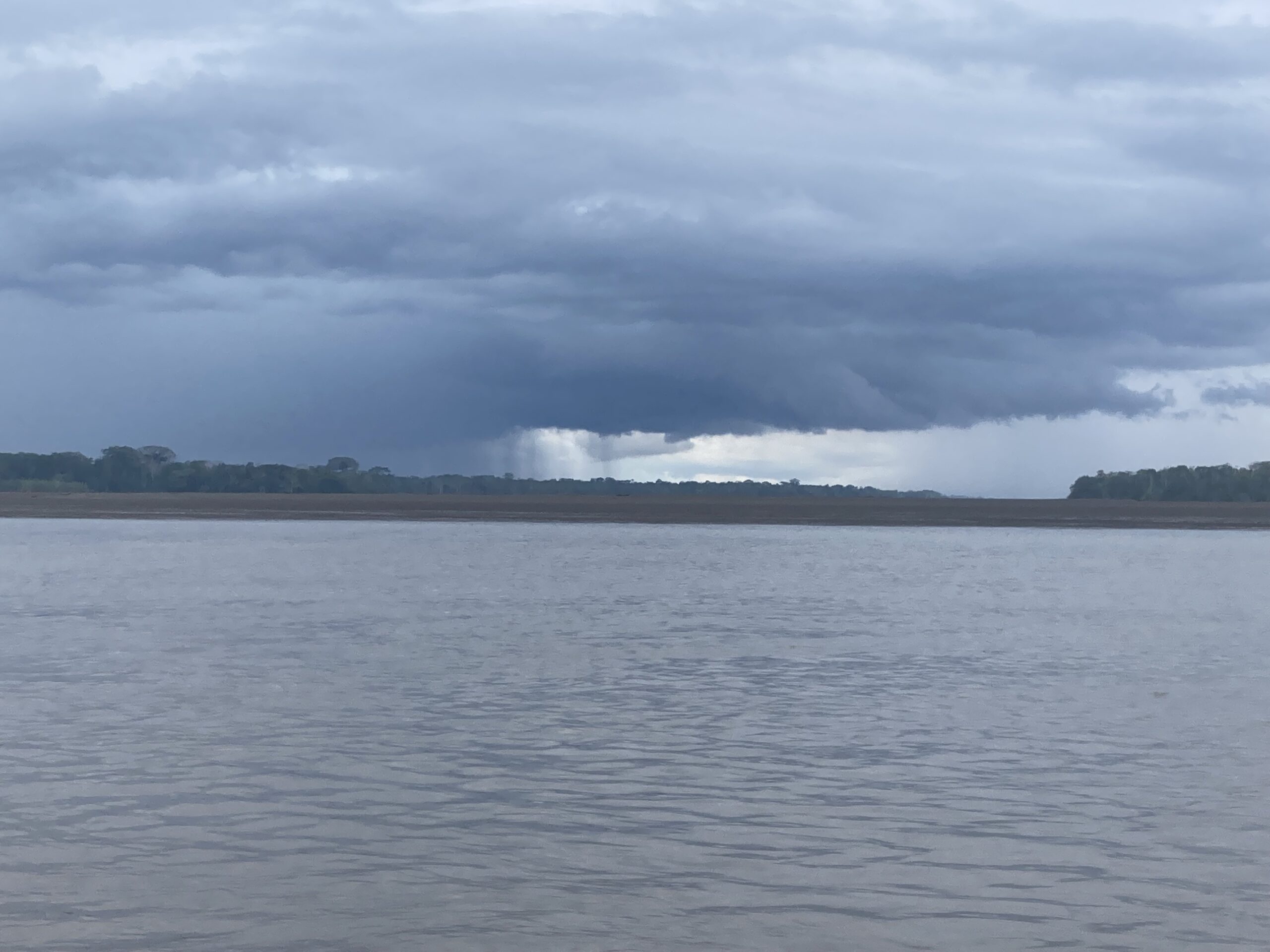 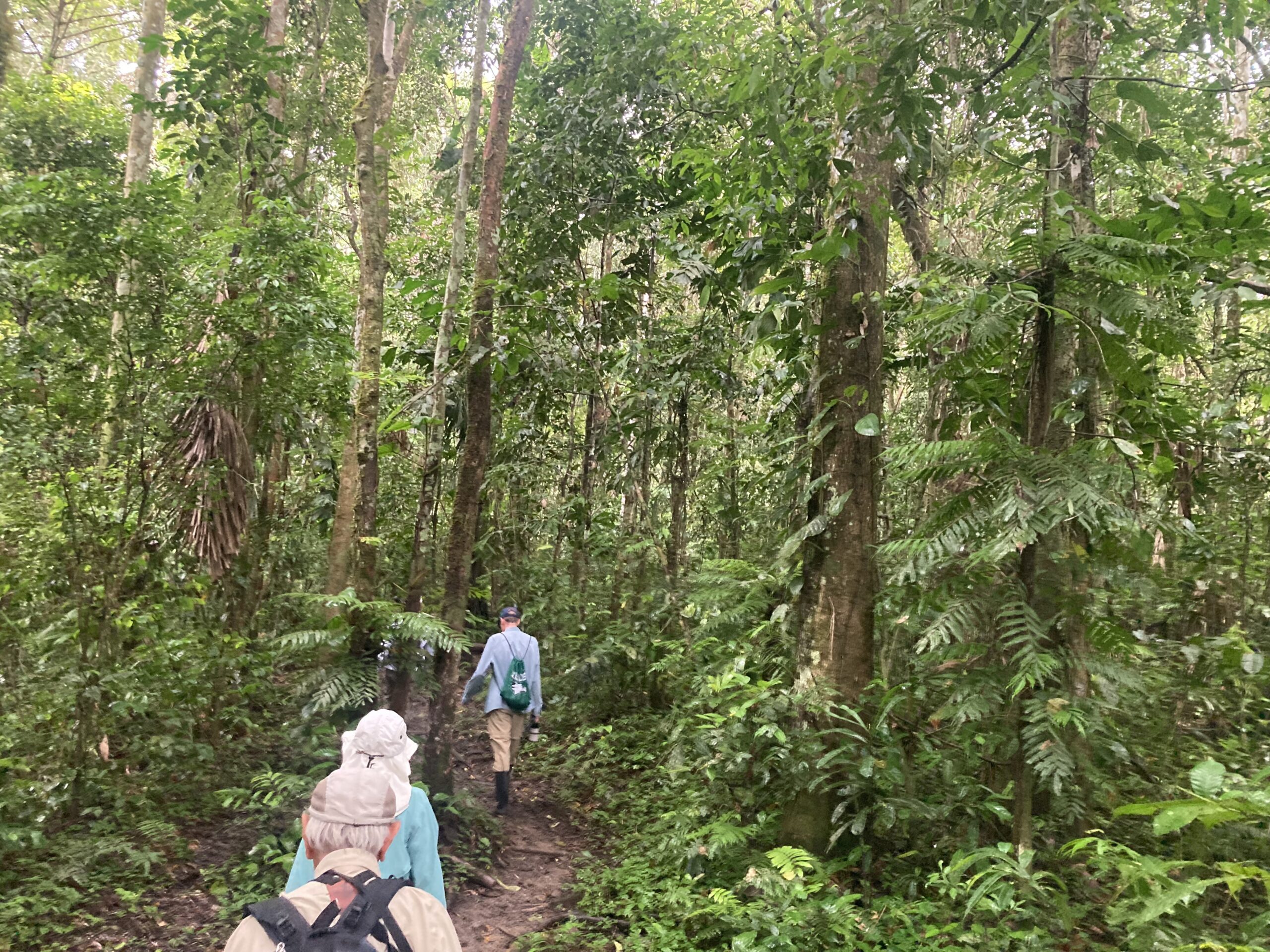 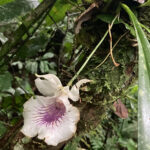 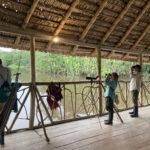 The gan on the porch 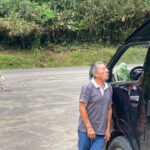 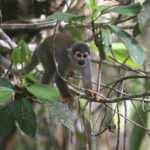